Use your email for login

Use your email for registration

Your Have 0 Item In Your Cart

No products in the cart.

Up to 30-Days of Protection

This alcohol-free surface protectant leaves a barrier of anti-microbial Protection that lasts up to 30-days. By applying once a mo
Category: sanitizers

Traditional, chemical-heavy disinfectants kill tough germs on contact. Unfortunately, once the disinfectant chemical evaporates, the newly cleaned surface becomes immediately susceptible to recontamination. It’s a known fact that many dangerous bacteria and viruses can survive for extended periods of time on surfaces, solidifying surface germ exposure and transmission as a very real threat.

D-FENZ Surface Protectant is a novel antimicrobial surface protectant that can be used alone or as a companion product to traditional surface disinfectants. It is comprised of naturally derived and especially refined inert particles that when applied to any type of surface, form a physical barrier capable of providing lasting surface sanitation. The anti-microbial barrier enacts a mechanical defense by physically preventing pathogenic microbial adhesion, colonization, and proliferation on treated surfaces. When the D-FENZ Surface Protectant liquid dries, a barrier is bonded to target surfaces, remaining locked in place until removed with abrasion. While virtually ‘invisible’ to the naked eye, D-FENZ Surface Protectant barriers can be seen and measured with the assistance of high-powered microscopy.

Composition analysis by third-party laboratories has been conducted to confirm the barrier’s safety, its physical nature, and its mechanical mode of action.

A microscopic, glass-like barrier shields surfaces for up to 30 days.

Dry surfaces are retrofitted with a mechanical defense that is deadly to microorganisms.

Use any type of sprayer to apply. Spray and wipe or spray and air dry.

Investigative studies using Staphylococcus aureus (ATCC 29214), Escherichia coli (TPM619), and Bacillus cereus (MGBC145) were conducted to test the longevity of D-FENZ Surface Protectant. Three plates per strain were treated with Surface Protectant and allowed to dry prior to inoculation. After the initial treatment, all plates were inoculated every weekday, incubated and observed for growth. A fresh control plate was used for each group daily to verify inoculant viability.

All control plates showed growth on day 1. After just a single application of D-FENZ protectant, treated plates were able to prevent microbial growth after 18-21 inoculations. Treated plates prevented growth of microorganisms for up to 27-30+ days.

Stainless steel surfaces were disinfected with concentrated bleach in preparation for testing. Surfaces were treated with D-FENZ Surface Protectant and allowed to dry prior to inoculating with a gram negative bacteria species, Serratia marcescens. After a 30 minute contact time, bacteria was recovered, plated and incubated for growth. This procedure was repeated (inoculation, plating, incubation) 20 times over a 30 day period. All re-inoculations were conducted on the initial treatment of Surface Protectant.

The same test was conducted on 5 competitor products. D-FENZ Surface Protectant was the only product to resist growth the entire length of the study. 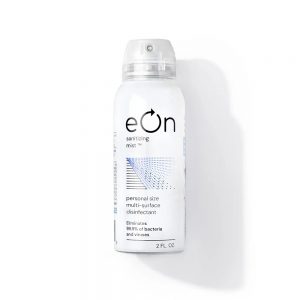 eOn™ Multi-Surface Disinfectant
0 out of 5
$6 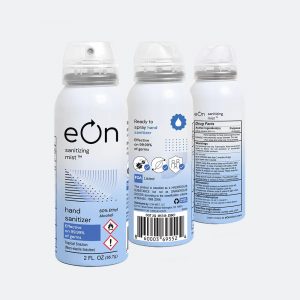 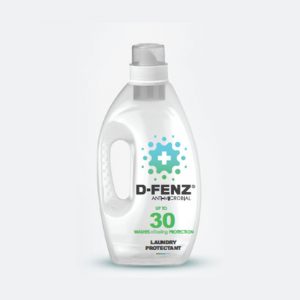 D-Fenz® Anti-Microbial Laundry Protectant
0 out of 5
$30

Get our updates always fast

10% off your next order when you sign up + be the first to know about new products and special offers.

We have decades of experience selling medical equipment and supplies.